I'll Be Right Back

My friend, David, sends me his essays from time to time, seeking my 2 cent's worth which I am happy to supply since, in return, I get at least a nickel's worth of things to ponder.  His latest, tentatively titled "Travels in My Three Pound Universe", expounds upon the disconnect between our physical and mental selves, to which he refers as Me and Me.2 (or I and I.2 and/or You and You.2, as appropriate, but isn't Me.2 fun to say?).

I can't speak for anyone else, but my Me.2 is in the driver's seat virtually 99% of the time. There may be those rare Zen moments when Me stops to drink in some physical sensation (i.e., being mindful of the moment which is harder to do than it sounds) but, mostly, I live in my head. And my head (ok, mind), while remaining firmly attached to my neck, goes on journeys from which it often returns only reluctantly, dragging its feet and looking back over its shoulder.

Anyway, David covered all this in his essay better than I can. However, it reminded me of how unnerved I was around the age of 13 when I first became aware of how seldom Me and Me.2 were in the same neighborhood. I thought I was nuts. No one else, I thought, can possibly feel this way or they'd be talking about it. That I could find myself in the middle of a game of dodge ball (ok, that's a bad example - during dodge ball Me was front and center trying to save my skin by hiding behind Shirley Crawford) eating a sandwich and feel like I had just returned from some lengthy mental journey that felt like it must have taken much longer than the allotted lunch period was, frankly, terrifying.

Years went by and I didn't seem much crazier than anyone else - more anxious, more shy, certainly - but not crazier. When I finally got around to discussing this with a couple of people it turns out we pretty much all feel that way in varying degrees. A friend told me her mother called it "sitting on a cloud" which, hands down, sounds better than "being a lunatic".

Someone needs to explain this to children. I can't be the only one who was frightened. And while they're at it, they can teach them to draw by employing the right sides of their brains - which is just about as mindful of the moment as you can get. It's a nice vacation from feeling crazy and everybody's drawings turn out great.
Posted by Unknown at 10:55 PM No comments: 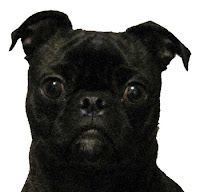 Today has much to recommend it. Today is Martin Luther King Jr's birthday. Well, probably not, but close enough for holiday purposes. And today the tv news showed a woman being pulled, alive, from a collapsed building in Haiti after being trapped for six days. And today Poppy, previously known as Puppy, became available for adoption through the kind services of Pacific Pug Rescue.

Puppy, who I shall commence calling Poppy in honor of her bright future, was sold to an eighty-something couple who lived on a busy road and have an unfenced yard. The "breeder", and I use the term loosely, passed her off as a pug, the closest thing to an upholstered concrete block as you can get in dogdom. How odd, then, that she clocks in around 75 mph as she makes the circuit through living room, dining room, kitchen, over the back of your chair, between your feet, across the dining room table, and ricochets off your chest. Pugs, unlike Poppy, do not normally require the use of a salmon net to retrieve them when they escape into the wild blue yonder.

As much as they loved her, despite the gouges from loving claws paws and the occasional broken pelvis (whoops! bad dog!), said eighty-something couple agreed to give her up as long as she went to a good home. I called Pacific Pug Rescue and by lunchtime Poppy, who it turns out, is a Boston Terrier with a possible smattering of pug somewhere in her lineage, went to stay with a lovely foster mother named Vicky who has a pug and a seven-month-old Boston Terrier.

So, thanks to the people who do big things like fomenting social change and reuniting families. But, thanks also, to the people who scoop poop at the Humane Society, and the volunteer surgeons at the Feral Cat Coalition, and thanks to the rescue groups who even take in rescues that don't quite fit the profile. Thanks Vicky.
Posted by Unknown at 8:27 PM No comments:

Always Take a Camera to Costco 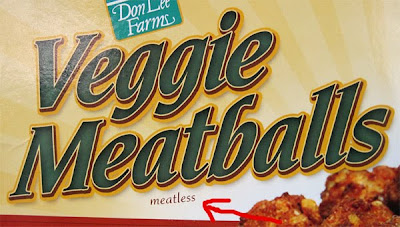 I guess they wouldn't call them Veggie Veggieballs. That would be redundant. Accurate, but redundant.
Posted by Unknown at 11:01 PM 1 comment:

Why I Don't Want to Be a Kid Again

The film adaptation of Where the Wild Things Are perfectly captures the frustration, fear, meanness, savagery, and helplessness that is childhood. With big fuzzy monsters. And a kid so obnoxious that women everywhere will be gobbling birth control pills.

Some things are just better on paper.

It has a PG rating. I think it stands for pretty grim.
Posted by Unknown at 11:14 PM No comments:

My friend, M, went to the Benson Hotel for champagne and dancing to a big band on new year's eve. She thought for a couple of days in advance about which dress to wear, and tried to get to bed early the night before. I went to Astoria. Oregon.

We started at the Pig 'n' Pancake for a little visit with friends passing through town. The wait staff kept giving us meaningful glances and heaving heavy sighs, so we didn't linger. They wanted to go home. A Pig 'n' Pancake official locked the foyer doors behind us before we even had our jackets zipped up against the (periodically horizontal) rain. Our friends set off for Long Beach. We went looking for debauchery or a reasonable facsimile thereof. With dancing, please.

Astoria is dotted with a variety of bars, pubs, and restaurants. One promising doorway had a portable fence like the one that keeps you in line at the bank - only they didn't have anyone to keep in line. And, besides, they wouldn't let us in because one of us left home without a driver's license. Being, clearly, decades past legal drinking age (face it, Oil of Olay can't work miracles) wasn't good enough and the conscientious bouncer turned us away.

In the end we dropped into a waterfront lounge and, lo, on the table was a card advertising dancing in the banquet room! What we found was a fresh faced DJ with enormous headphones playing electronic music to a virtually empty room, save for one medium-small girl in a party dress perched on the edge of a chair swinging her legs to the beat. A tiny disco ball twirled on the ceiling. Never being of a mind to pass up a dance floor with plenty of elbow room, we asked the DJ to look in his library for something suitable for swing dancing. He knit his teenage brow and allowed as he might have some Rat Pack music.

Good enough. We shed our shoes (the dance floor was carpeted...) and got right to it - a little east coast, some one step, a dip here and there - and darned if people didn't stop and look. And then they came in. And then they danced, too. Even when the DJ played YMCA. At midnight the restaurant staff brought us plastic hats, horns, and tiny cups of champagne. It was just dandy.

Happy New Year, loyal readers. Both of you.
Posted by Unknown at 11:16 PM 3 comments: