What Goes Around, Comes Around

To the people who swipe artwork and turn it into widely disseminated joke emails: At least have the common decency to leave the signature on the artwork. I won't sue you (probably) since you aren't making any money off the stolen work in question. And I know you figure it won't ever land in the mailbox of the original artist (wrong). But, maybe, just maybe, if you leave the signature on, someone might google my slightly unusual last name, Kadel, and go to my website and BUY some artwork.

My own work, uncredited, has shown up in my email twice in less than two months. The first one was for Halloween. I almost deleted the email, but for some reason I scrolled to the bottom (no pun intended, but it should have been...) and there she was. 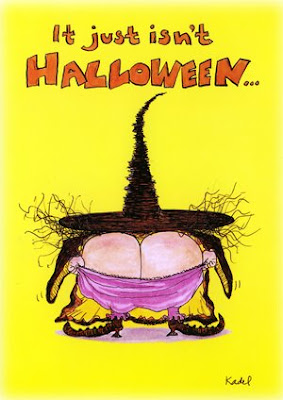 The most recent one was turned into an animation (pretty nice job, art stealer, but you got the mouth wrong). Here she is in her original form, the one with the good mouth... 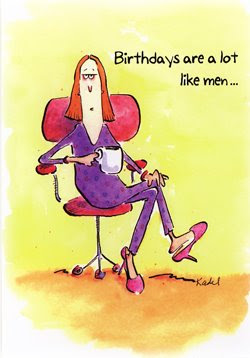 Now, go ahead, drag them to your desktop, add a cute saying, and send them to 10 million of your closest friends, but leave my name on them. OK? Thank you. Thank you very much.
Posted by Unknown at 11:08 AM 1 comment: 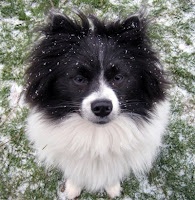 I just love weather news. Not the regular weather report, I mean Storm Team Central, that relentless round of live reports by ruddy cheeked reporters in huge parkas stationed at freeway overpasses and high-elevation problem spots around town. I can't get enough of film clips of vehicles spiraling down hills in slow motion, ricocheting off parked cars and telephone poles. Rapes and murders disappear from the radar to make way for close-ups of reporters' boots scuffing a half-inch of gravelly snow.

When you live someplace that's basically gray for about eight months of the year it pays to make the most of what moderately interesting weather there is to be had. We don't have many tornadoes (ok, we had a little one this year that took the roof off Kentucky Fried Chicken, but that was God making a statement about obesity), and darn few hurricanes.
Ooh! It's snowing again. Gotta go turn on the tv.
Posted by Unknown at 8:04 AM No comments:

It's the Hap-Happiest Time of the Year

A couple of days ago, in among the Christmas cards and insurance ads, there was an envelope in the mail from Peaceful Paws, the pet cremation service where the emergency vet sent my beautiful little dog. Now, I have to think it can't be a cheery job, cremating a steady stream of dogs and cats, nipping a lock of hair to sell you later in the form of a paper weight or pendant, taking footprints from lifeless feet to make keepsake ornaments. There must be a level of callousness that these people have to achieve in order to go to work every day.

But the contents of the aforementioned envelope stopped me cold. The heading wished me "The Gift of Warm Memories... of Seasons Past with (sic) Gromet", but the kicker was the title of the poem to follow, printed in a bold font, Christmas Without My Dog. They had customized the heading and poem, misspelling both his name, Gromit, and his breed, schipperke.

I guess it was well meant. Later, after I regained my composure, I peered into the envelope looking for a page two that offered me the chance to buy some warm memories at budget prices, but they weren't trying to sell me a darn thing. All I can say is, Peaceful Paws, what were you thinking??
Posted by Unknown at 6:00 PM No comments:

Cocoa and keyboards do not mix. My numbers are now limited to 456789. That's it. No one, two, or three. Also no decimal point, directional arrows, or forward delete key.

Now there is something on my Christmas list. Damn heartwarming breakfast beverages.
Posted by Unknown at 11:13 PM No comments: