My town is a friendly place. Unpretentious, a little short on urban planning, replete with strip malls, but also populated with nice parks, a cute downtown, and a bike path along a pretty riverfront. All in all a good place to raise a family. That's why my heart was warmed a few nights ago when I overheard a young woman, enjoying an evening out with her middle-aged mother, "Are you hammered, Mom?"
Posted by Unknown at 5:29 PM No comments:

The Circle of Life

When you're looking for a receptacle for a bucket of dog feces that you've scooped up from the yard, how appropriate is it to find a nice big empty dog food bag on top of the garbage can? That, my friends, is the circle of life.
Posted by Unknown at 5:54 PM No comments:

Hello? It's me again.

The last couple of days have given me reason to ponder the presence of guardian angels in my life (or angles according to the misprint on the postcard sent to me by my dear friend and guardian angel). These celestial beings don't come clad in silver lamé with fluffy wings and a backup band, uhh, choir. More often than not, they need a haircut and they show up in yesterday's shirt because they know you need them now, not later.

Here's how it works. You tell them you're fine, just fine thanks, ok?, fine, and you don't need them.

And then they show up. Sometimes in person, sometimes on the phone, and these days, sometimes in your email. The effect is much the same.

A few years ago a friend's niece went through an annoying, new-age, guardian angel phase that I heard about in passing. As best I recall, the concept involved an invisible being that hovered somewhere in the neighborhood of your ear and kept you from being set upon by ravening beasts and/or being crushed by falling pianos. It's possible they might also have kept you from embarrassing yourself at parties. I'm not sure. Nice, but not practical.

I'm talking about the honest to gawd, three dimensional kind that shows up when your dog dies and doesn't care about the snot on their jacket. The kind that is there at the hospital when you wake up at 11 pm when they should have gone home hours ago. The kind that shows up on a 97 degree day to move your stuff and never asks where the pizza is. The kind that calls you after dinner because you sounded blue in the afternoon. The kind that finds a new guinea pig on Easter Sunday to replace the one the dog ate. (No, not that dog. A different dog.) Even the kind that tells you to suck it up get a life. That's what I'm talkin' about, Willis.

"Evangelical atheist" is the absolutely enchanting phrase I read on a recent blog commenting on the current "Imagine No Religion" campaign. Now, I'm not particularly political, seeing as how I'm far too lazy to stay current, much less analyze the material I have(n't) read. However, I have to hand it to the gang whose purpose seems to be to alert the general public to the notion of attending to creating heaven here on earth, especially if that includes caring for your fellow time travelers.

Sometimes, lying in bed at night, I make a mental list of the people I could, without hesitation, call at 2 a.m. on Christmas eve in the middle of a hurricane. It's an embarrassment of riches. Thanks.
Posted by Unknown at 9:50 PM 1 comment:

Recounted to me by my friend, Miss Miller...
Middle aged woman, devoted to her late, yet still beloved, cat wears one of those rubber wrist bands, this one bearing the message "Until we meet again at the Rainbow Bridge". Cheery young grocery clerk, making conversation, "How great! You're a supporter of Gay Pride." Consternation ensues.
Posted by Unknown at 11:30 PM No comments:

Leo and I have opened an assisted living facility and, as everyone knows, the elderly can be a mixed blessing.

Our only resident is Sampson, a snowy haired gent who closely resembles a lightly upholstered football.

His primary hobby is snoozing.

Snoozing and eating. And scratching on the cupboard door where the food is stored, just in case there might be more eating to be done. You never know.

Sampson, or Sam as he likes to be called (he's embracing being one of the boys), was feeling poorly when he arrived. A little droopy and sneezy and blowing snot bubbles of remarkable proportions out of his nose. He took great exception to having his face wiped. Exception in the form of biting the hand that wiped him. The elderly can be so fractious.

Time and the miracle of modern pharmaceuticals have improved his health and hygiene to the point that he is all for taking an active role in whatever social life there is to be had. 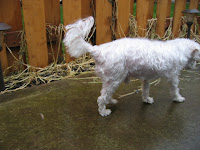 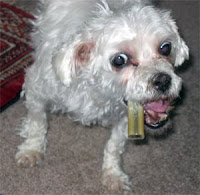 ...that sometimes lands you in jail. 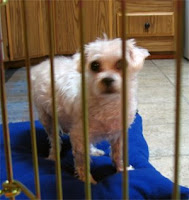 You Go That Way So We Won't Be Seen Together

Over the last few decades, and probably before, there has been a great gnashing of teeth and rending of garments over the (im)moral content of movies. But, has anyone addressed the morality of movie patrons?

The advent of mulitplex movie houses has put the souls of moviegoers in mortal danger. I'm talking about movie jumpers. (Is that a real term? I just made it up.) Those are the people who plan an entire afternoon around slinking from theater to theater to see as many movies as possible on a single, ridiculously expensive, admission ticket. A willingness to kill time watching the commercials scroll by in empty theaters, to watch 20 minute segments of movies wherein the plot was explained an hour before, and to transverse the connecting bathrooms again and again is required, not to mention a healthy disregard for the possibility that a lighting bolt may strike you dead or, more likely, the snack counter worker bee will call you out.

Karma is such that finding more than one watchable movie conveniently scheduled is extremely rare. So it's a little like eating all five of the Arby's five for $5 deal just because the sandwiches are so cheap. You don't feel very good, but you got a great deal.

For $3 you can see a movie at Jubitz or McMenamins or probably your neighborhood theater if you don't mind ratty seats. Save money, see a decent movie, and avoid the eternal flames of hell. What's not to like?
Posted by Unknown at 9:34 PM 1 comment: