Keeping the Marmaduke in Christmas

I would be the first to admit that I'm not a big fan of Christmas. Just when we had all had it up to here with political ads, shazam, Christmas ads. The newspaper weighs 10 pounds. 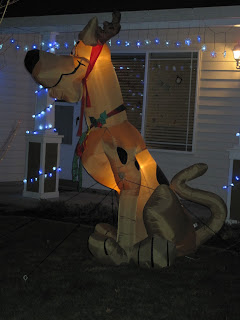 But everything has a silver lining and by silver lining I mean giant, internally lit, inflatable yard decor. Within dog walking distance of my house there's a rooftop Santa on a motorcycle, Frosty the enormous inflatable Snowman, a six-foot snow globe, and best of all, Marmaduke. I mean, what's more Christmasy than Marmaduke? Second best is the potentially-inflatable Santa down the road apiece who has yet to be inflated. He lies, face down, in a capacious field as though he has overdosed on sugarplums. All that's lacking is crime scene tape.

But Do I Need to Know the Secret Handshake?

From an online review of a local Portland Eagles Lodge, posted August, 2009:
"Okay, seriously. I don't know why the rest of you don't join the lodge. We raise $$ for charities like the Oregon Food Bank and the Giving Tree; the booze is cheap; friendly service; free wife, and very soon a public computer terminal; pool tables, shuffleboard, Golden Tee; and hey, if you're not sold yet, we've got live bingo action and square dancing."

Now, I don't know about you, but I wouldn't require the live bingo and square dancing as long as I got the free wife. No more vacuuming for me.
Posted by Unknown at 2:34 PM No comments: